Can I get in trouble for swearing? 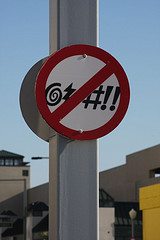 Depending on the circumstances, using profanity or offensive hand gestures may cause you serious problems. In some parts of the country, you could be charged with disturbing or breach of the peace or violating a local profanity law. At school, you could be suspended or disciplined with an after-school detention or additional homework. Your parents may be called and told of the incident.

In January, 2011, Pennsylvania settled a free-speech lawsuit involving the use of profanity by the public. In recent years hundreds of citations were issued by the state police for swearing at officers, at other residents and even at an overflowing toilet. Tickets issued for disorderly conduct carried a $300 fine. The Pennsylvania Supreme Court had ruled years ago that speech is protected even if profane unless it is obscene or threatening. This, however, does not authorize students at school or a school event to engage in profanity. The 1986 case of Bethel v. Fraser approved school discipline for lewd and obscene speech by students. In June, 2012, the town of Middleborough, Massachusetts (population 20,000) passed a law that allows the police to issue a ticket for swearing in public. A $20.00 fine is possible but the law may be challenged as a violation of free speech.

On the lighter side, Sister Kathy Avery is the principal of St. Clare Catholic School in Michigan. She doesn’t allow words like “boring” and “stupid” at school and has zero tolerance for any swear words. 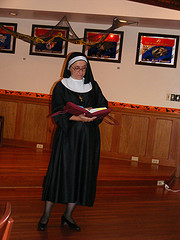 At an assembly after school in November, 2007 she made it clear to fifth to eighth-graders what was forbidden – she read off a list of the words and phrases so that the kids clearly understood which words to avoid. Some parents were shocked that she actually said the words, while others applauded her approach.

On the other hand, a few timely swear words can be very costly. In April, 2011, Kobe Bryant who is a guard for the Los Angeles Lakers fouled a player on the San Antonio Spurs. The referee called a technical  foul that sent Kobe to the bench. Angry at the call, Kobe through a towel and called the ref a “F—– f–.” The commissioner of the National Basketball Association, David Stern, called the homophobic slur offensive and inexcusable. “Such a distasteful term should never be tolerated . . . insensitive or derogatory comments have no place in our game or society.” The five-time NBA champion was fined $100,000.00.

In another instance of language regulation, the country of Pakistan banned over 1500 English and Urdu words from being texted. The government’s telecommunications authority gave cellphone companies a week to inplement the order. The November, 2011 action was explained as an attempt to block spam messages and included sexually explicit terms and swear words. The list also included less offensive words like “fart, idiot, headlights, Jesus Christ and tampon.” Does this make you appreciate our First Amendment?

For the first time in the history of English soccer, player John Terry is being prosecuted for his language on the field. Terry is the captain of England’s team Chelsea. In a match against the Queens Park Rangers in October, 2011, Terry allegedly let loose with racial slurs against a black opponent that were broadcast around the world. He is charged with racially aggravated public disorder and is set for trial in February, 2012. He faces a 2,500 pound fine if convicted (approximately $4,000.00 in  US dollars).