Freshman “made lots of people smile and laugh”

This is one of many comments added to a Facebook group mourning the death of Kameron E. Jacobsen. On January 18, 2011, Kameron ended his life. He was 14 years old.

Kameron was a freshman at Monroe Woodbury High School in New York. He was reportedly bullied at school and online about being perceived as gay. Although his family has asked for privacy during this difficult time, numerous support and memorial groups have been created online.

A friend of Kameron’s summed up the tragedy in writing: “He was so young only 14. He never got a chance to get a driver’s license, he never went to a prom, he never got to grow up and do all the things he should have done. He had a girl in school that he really liked and who knows if he even got his first kiss.” 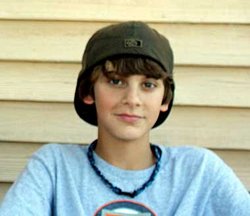 In Kameron’s obituary his family wrote: “We hope as a community both collectively and individually we can find a way to finally put an end to this!” Assuming the family means bullying, we wholeheartedly agree. Bullying in all its forms must stop. Think about what you can do to help in the fight against cruel, thoughtless communication – online, in person and by text. Maybe just being kinder is a start.

Read more about Kameron on the KAM Foundation’s website Kindness Above Malice:  http://www.kindnessabovemalice.org/meet-kameron/

Tragedy hit Kameron’s community twice in January. Two weeks before Kameron’s passing, 16-year-old Justin Dimino committed suicide. Justin was a junior and star football player at the same school. There was no evidence of bullying against Justin.

For help and a professional to listen when you feel you can’t go on, contact: