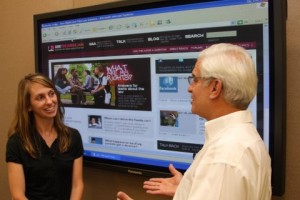 Retired juvenile Judge Tom Jacobs is the creator and moderator of AsktheJudge.info. He was an Arizona Assistant Attorney General from 1972–1985 where he practiced criminal and child welfare law. He was appointed to the Maricopa County Superior Court in 1985 where he served as a judge pro tem and commissioner in the juvenile and family courts until his retirement in 2008. He also taught juvenile law for ten years as an adjunct professor at the Arizona State University School of Social Work. In addition, he is the author of numerous legal books for teens and tweens as well as lawyers and judges. Find out more about Judge Tom’s books here.

Natalie is an attorney who practiced criminal law for five years before joining her father Judge Tom to work for AsktheJudge. While practicing criminal defense, she handled cases involving juveniles in trouble with the law. During that time, Natalie was a volunteer attorney for the Northern Arizona University Justice Project which reviewed prison inmates’ claims of actual innocence. In addition, she sat on the board of Girls on the Run for two years, a non-profit focusing on educating and preparing third to eighth grade girls for a life-time of self-respect and healthy living.