“Read down your fine” at the library

Although many libraries depend on fines for late books to help with their bills, some are considering the economy and the purpose of a public library. Not all families have Internet at home or the ability to buy books for their kids. The public library is about reading, not making money.

At the New York Public Library, once a borrower has $15.00 in unpaid fines they can’t check out anymore books until the fines are paid. There are approximately 143,000 people on the current list of offenders. However, instead of keeping young people away from the library out of embarrassment over the money owed, the library has started a “Read down your fine” program. For every 15 minutes spent reading, the library reduces the fine by $1.00. The reader isn’t monitored either. Trust is the name of the game. 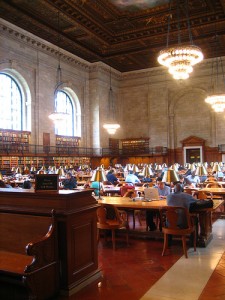 An estimate of $2 million in fines may be written off the books by the end of the amnesty program on September 9, 2011. The Library has one former patron they don’t expect to see or hear from. In 1789, George Washington checked out two books: “Law of Nations” and Volume 12 of “Common Debates.” They were never returned and the fines are now approximately $300,000. Although the fine will remain unpaid, the library would like the books returned.

So, recognizing the need for libraries to remain open to the public, do your part in returning them when due. If late, pay the fine and consider it a donation to the existence of the library.