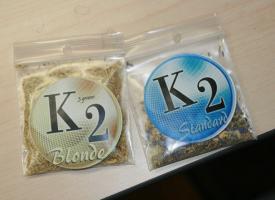 Brandon Rice lived with his family in Pittsburgh, Pennsylvania. He was a normal eighth-grade teen who liked his computer, roller coasters and baseball. In June, 2011 he thought he was smoking marijuana but it was fake or synthetic marijuana commonly called K2 or Spice. He got it from an older friend. Brandon developed nausea, a full-body rash, headaches and a high fever. His parents put him in cold water when his temperature hit 103. When they took him out of the water it had gone up to 104.

He was placed on a respirator to help him breathe. The chemicals added to the crushed flowers and plants combined with chemicals from the container he used to smoke the Spice burned his lungs so severely that he had a double lung transplant in September, 2011. Brandon used a plastic PEZ dispenser to smoke the drug. Experts suspect that highly toxic cyanide gas and carbon dioxide released from the heated plastic contributed significantly to his lung damage.

After six weeks in the hospital, his doctors said there was little they could do to improve his condition. Brandon’s mother explained that after the transplant, the anti-rejection drugs he had to take weakened his immune system. He was unable to fight off an infection he caught in October. Brandon passed away on October 27, 2011. He had just turned 14 years old.

Dr. Neil Capretto, Medical Director of the Gateway Rehabilitation Medical Center in Pittsburgh, issued a warning about the use of synthetic marijuana: “We do not really know the long-term effects of this substance because it hasn’t been studied, so really the use of it on an ongoing basis or even a one-time basis is literally Russian roulette with your brain.”

See here for a statement from Brandon’s father and Dr. Capretto.

Approximately 30 states have taken similar action, but spice manufacturers find a way around the law by changing the chemicals used in making spice. It shouldn’t take a law to prevent people from hurting themselves or dying. The fact that smoking spice is dangerous to your mental and physical well-being should be enough to get your attention. Whether a law restricting its use is on the books or not doesn’t change the risk involved in smoking it. Use your head and make intelligent decisions about what you put in your body. No parent, brother, sister or other family member should have to suffer the loss of a loved one or the pain Brandon’s family lives with today.