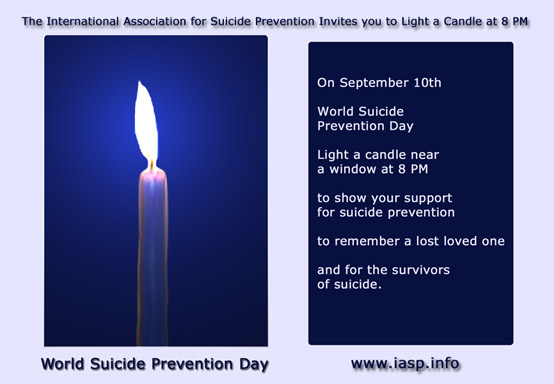 The International Association for Suicide Prevention (IASP) has declared this Saturday, September 10, 2010 as World Suicide Prevention Day. It has posted a list of activities planned in many countries as well as banners in 42 languages. There is also a Facebook Event page and a free brochure available through their site.

Did you know that each year one million people are estimated to die by suicide across the globe? That’s 3,000 every day – approximately every 40 seconds a family loses a loved one to suicide. Organizations such as the IASP and the World Health Organization include as part of their mission efforts to decrease these numbers and make a difference in the lives of those at risk. 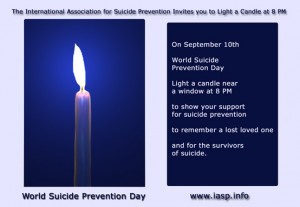 You can show your support for all those contemplating suicide, victims and their families by lighting a candle and placing it in a window this Saturday night at 8 p.m. – September 10, 2010. Wherever you are your participation will shed light on the subject and help others in need.

Awareness needs to be raised that suicide is a major preventable cause of premature death. Prevention programs and community activities can help the 20 people who attempt suicide for each victim that succeeds. Adequate treatment and follow-up care for those in need is required.

Traditionally, suicide rates have been highest among elderly males. Now, however, the rate among young people including the teen suicide rate has increased to the extent that they are the highest risk in one third of all countries.