What is a lawsuit?

Have you ever worked for someone, baby-sat, or done yard work and not been paid?  Was your first car a lemon and the seller refused to do anything about it?  Does someone keep bothering you even after being warned by the police?

If your answer to any of these questions is yes, you may have a lawsuit on your hands. A civil lawsuit is a disagreement with someone about property, personal behavior, injury, or any activity that affects your rights. A criminal lawsuit can only be filed by the government—by a prosecutor. It isn′t a private suit with one person against another or against a company. A criminal suit pits the government (city, state, etc.) against an individual.

Everyone has the right to go to court to ask for help in resolving a dispute. However, when this right is abused, the court may limit its access. For example, an inmate in West Virginia, serving a life sentence for murder, filed 5 lawsuits seeking hundreds of thousands of dollars in damages. He claimed injury for such incidents as glass in his yogurt, an exploding television, and an exploding can of shaving cream! All of his lawsuits were thrown out of court as frivolous, and restrictions were placed on his use of typewriters and computers.

In your civil dispute, if all attempts to resolve the issue fail, you may ask a court to settle it through a lawsuit. With the help of your parents, guardian, or attorney, you may be able to sue the person or company that violated your rights. Generally, until you′re an adult, you can′t file a lawsuit by yourself. What is called a next friend must file the suit on your behalf.

Once the lawsuit is filed, the court, with or without a jury, decides the case after considering the evidence and the arguments of both attorneys. You and your opponent are required to follow the court′s decision.

Millions of lawsuits are filed in the United States each year. Some take years to settle or get to trial. Alternate dispute resolution (ADR) is a process of settling many of these lawsuits without waiting for your day in court. The trend in all areas of litigation, with the exception of criminal prosecution, includes some form of ADR.

A similar practice called plea bargaining exists in criminal cases. This occurs when the prosecutor offers to reduce the charge against you if you agree to admit to the reduced charge. Let′s say you′re caught breaking into someone′s house and stealing $50. The prosecutor files two charges against you—burglary and theft. The “bargain” offered is your admission to one of the charges in return for dismissal of the other. This is a common and necessary practice in criminal and juvenile delinquency cases. There are too many cases filed for each to go to trial, and the offender′s rehabilitation and treatment can begin sooner if a plea bargain is accepted.

Mediation and arbitration are two methods of dispute resolution that have become increasingly popular around the nation. You may have experienced similar methods at school in settling disputes with other students. Mediation involves a neutral third person who assists the parties in the lawsuit to reach a compromise. Suggestions and proposals regarding settlement are made. If an agreement can′t be reached, the parties may agree to take the next step—arbitration—or go to trial. 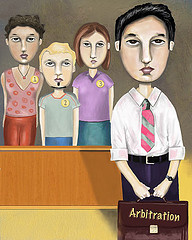 In arbitration, the parties to the lawsuit agree in advance to let a third person consider the case and decide the issues. You and your attorney meet with the arbitrator and your opponents. The case is discussed, both sides present their evidence and arguments, and the arbitrator reaches a decision. The arbitrator is usually someone who has knowledge and experience in the area concerning the lawsuit. He or she is generally trained in arbitration skills. Hundreds of cases are settled this way, saving time, money, and aggravation.

If all attempts at resolution fail and you′re considering filing a lawsuit, make sure the time limit hasn′t expired. A statute of limitations requires that lawsuits be filed within a specified time (two years, for example). If you go past the deadline, you won′t be able to pursue your rights. This law applies to both civil and criminal cases, with a few exceptions in criminal law (murder and treason, for example, have no statute of limitations). These crimes may be charged at any time, even twenty to thirty years after the incident.