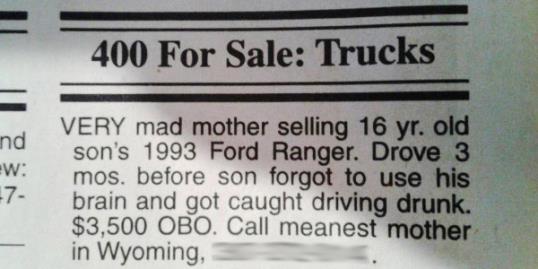 Here’s another story about a parent taking swift and hopefully effective action when she discovered that her 16-year-old son got a ticket for driving drunk. The ad pictured here speaks for itself. This is what she posted in her local paper in Wyoming. The story has gathered over 100,000 likes with much discussion about her parenting tactics.

What do you think? Some people posted that she didn’t have to go so far – that she could have grounded him for a period of time, taken his driver’s license or restricted his driving to school and work. But would that really be a lesson for him? After all, driving anywhere at any time for a new teen driver is a thrill. Just getting behind the wheel and going a short distance is a satisfying experience. 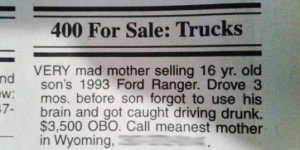 Another reader suggested that she take her son and the truck to the junkyard and let him watch as it’s crushed into scrap metal. Either way, his loss of the truck and his driving privileges should register for some time. Drunk driving kills thousands of teens every year – it’s the number one cause of death for young people in the U.S.

We think this Mom takes her responsibility as a parent seriously and did her son and others a favor by taking him off the road until he matures a bit. We wrote about a similar incident in 2008. You can read it here.