No Indiana Colts shirt to school!

Maurepas High School in New Orleans, Louisiana, relaxed its school uniform policy for one day in celebration of the 2010 Super Bowl. The administration encouraged students to wear the New Orleans Saints colors on what was called “Black and Gold Day” on the Friday before the big game against the Indianapolis Colts on February 7, 2010.

Brandon Frost, a 17-year-old senior at the school, was originally from Indianapolis. He wore a blue Colts jersey to school stating “If they tell other students to support their team, why can’t I support mine?”  The principal reportedly told Brandon on Friday that “If you like Indiana so much, why don’t you go back?” Brandon was asked to change his shirt but wasn’t sent home. His father gave him permission to leave and come home if he was hassled about wearing the jersey. 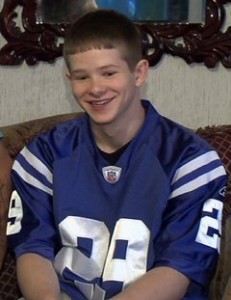 A little irony exists in that Brandon wore the jersey of Joseph Addai, number 29, who is a Colt running back and graduate of Louisiana State University. The matter is under investigation for possible first amendment violations regarding freedom of expression and speech.

What do you think? Was Brandon’s right to free speech violated by the “Support the Saints Day” dress rule? Should this incident be noted in Brandon’s school record? Why or why not? Should a public school be able to select what teams you support or positions you take on a political issue? Do you think the principal was right or wrong? Could this have been a teachable moment at the school about the First Amendment?