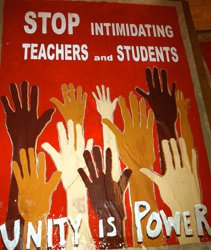 Hope Moffett, age 25, worked with Teach for America before taking a position at Audenried High School in Philadelphia two years ago. A planned conversion of the school to a charter school is underway. Moffett and others object to the change and have become vocal in their opposition.

In February, 2011, Moffett encouraged her students to voice their opinion by letting the district administrators know how they feel. Without notifying any parents, she provided bus tokens for students to leave school and travel three miles to the district offices where a protest was underway. Moffett denied organizing the protest. However, in the days leading up to the protest, she helped students make signs. 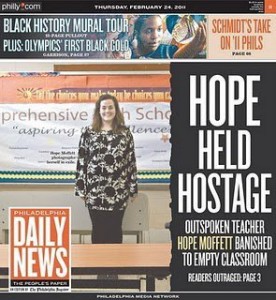 The school was concerned about the safety of the 53 students who participated while in route to the protest. Teachers met them there and escorted them back to school.

Moffett is accused of crossing the line in her zeal to teach students they have a voice and should use it. The school superintendent explained that “when you endanger the welfare of children, you’ve got to take the disciplinary action that comes with it.” Moffett was terminated as a result of her “poor judgment.”

Could Ms. Moffett have gone about this differently? Do you think the outcome might have been better for her if she obtained parental permission first for the students to leave campus? Do you think termination from her job was harsh? Why or why not?