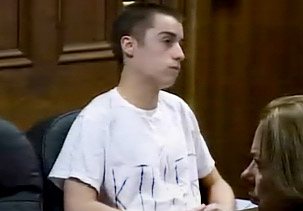 In February,  2012, T.J. Lane opened fire in a school cafeteria at Chardon High School in Ohio. He killed three students and injured three others. One year later he pleaded guilty to numerous charges but offered no explanation or motive for his crimes.

In March, 2013, 18-year-old Lane was brought to court for sentencing. On his way into the courtroom, he wore a blue button-down shirt and removed it once he sat next to his lawyer. On his white T-shirt he had written “KILLER” with a marker in capital letters, similar to the shirt he wore during the killing spree at the school. He smirked throughout the proceeding in the presence of victims’ family members. 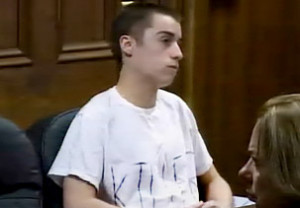 Lane was sentenced to three consecutive life terms without the possibility of parole. Lane turned around and swore at his family as well as the victims’ families. He flipped them off and stated that “This hand that pulled the trigger that killed your sons now masturbates to the memory. —- all of you.” Since Lane was 17 at the time of the crime, the death penalty doesn’t apply to him. In 2005, capital punishment was outlawed in the U.S. for teens who commit crimes while under age 18.