Judge Tom
You and Your Body
1

What is date rape, and what can I do to protect myself? 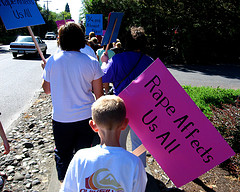 “I had a few drinks and let my guard down.”

“I′ve known him for years—I thought he respected me.”

These are common statements of rape and date rape victims. Due to a few well-publicized cases, people have become more aware of incidents of date or acquaintance rape.Yet date rape continues to increase in frequency and remains underreported.

Rape means having sexual intercourse with a male or female forcibly and without his or her consent. Rape can occur among a male and a female or two people of the same gender; either a male or a female may commit the rape. In gang rape, a person is raped by several different people. Annual reports indicate that 16 to 20 percent of U.S.women are victims of rape or attempted rape. Five percent of rapes result in pregnancy, or 4,315 unwanted pregnancies each year.

It may also be considered rape, and therefore a crime, if both parties consent to sex but one person is under a certain age. Some states have established a minimum age before a girl can legally consent to having intercourse. If you have sex with someone under the legal age limit, even if it′s with the consent of the underage person, you′ve broken the law. A violation is referred to as statutory rape, which is a felony. If the victim is injured, or the incident involves a weapon, threats, or violence, the act becomes aggravated rape, which carries a greater penalty.

In cases of date rape, victims usually know their offenders. The offender can be a longtime friend or casual acquaintance. Drugs and alcohol are major contributors to date rapes. Some experts suspect that only one out of ten date rapes is reported. Because of low reporting, and the even lower incidence of prosecution and conviction, education may be the only way to deal with date rape.

Many high schools and colleges offer orientation programs aimed at rape awareness and prevention. Fraternities and sororities are conducting similar programs. They advise students to always be on the alert, to walk with friends at night, and to carry pepper spray, mace, or a whistle. Students are also warned to remain sober to lessen the risk of date rape.

If you′re a victim of rape, date rape, or attempted rape, get help. Call a crisis line, tell your parents or a friend, and report it to the police. Provide as much identifying information as you can: physical descriptions, clothes, make and color of car, and any other details you can recall. More details will increase the chance for an arrest and conviction. If you suffer visible injuries in the assault, let the police, a doctor, or a friend take pictures of you. This type of physical evidence is invaluable at trial.

Sidebar:  Although not acquaintance-rape, it’s merits mentioning that the African nation of Congo has been called the most dangerous place on earth to be a woman. A report from the Johns Hopkins’ Bloomberg School of Public Health in May, 2011, stated that 48 women are raped every hour, that’s 1,152 each day!

Coping with Date Rape and Acquaintance Rape by Andrea Parrott (Rosen
Publishing Group, 1999). Preventive strategies on how to keep from
being a victim, plus counsel and advice for those who have already
become victims.

Everything You Need to Know About Date Rape by Frances Shuker-Haines
(Rosen Publishing Group, 1999). What is date rape and whose fault is it?
This book makes it clear that the victim is never at fault.

Past Forgiving by Gloria D. Miklowitz (Simon & Schuster, 1995). Fifteenyear-
old Alexandra finds that her boyfriend, Cliff, demands all of her time,
isolates her by his jealousy, and finally becomes physically abusive. A
compelling novel, honest in its exploration of date rape and how love
can go wrong.

When Something Feels Wrong: A Survival Guide About Abuse by Deanna
Pledge, Ph.D. (Free Spirit Publishing, 2003). A book for teens on all forms of abuse, including date rape. Offers ideas for coping with and overcoming abuse.

Gentle Touch′s Web
www.gentletouchsweb.com
Stories from abuse survivors and the opportunity to share your own.