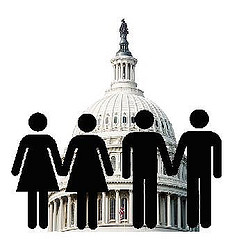 Update: On June 26, 2015 marriage equality in America became a reality. The Supreme Court ruled  5 to 4 in Obergefell v. Hodges that gay marriage is legal nationwide, not just in those states that had already legalized such. The bans in a dozen states no longer have any legal effect. You can read the history of the movement below starting with the first state to allow gay marriage in 2004.

Before the Supreme Court ruled in June, 2015, we maintained the following list of states that legalized gay marriage.  We provided the year the law went into effect, the name of the law when titled by the state legislature, and a citation where the law can be found. Some states didn’t pass a gay marriage law. Instead a court determined that the existing law prohibiting gay marriage was unconstitutional. In those states, we list the name of the court decision and citation for the case. If you want to read the court’s decision, ask a reference librarian at your public library for help or Google the full name of the case.

It should also be noted that some gay Native-Americans are allowed to marry on tribal lands. It’s entirely up to each sovereign nation to set their own laws for members and on tribal reservations. This includes the Cheyenne Arapaho Tribes in Oklahoma, the Coquille Tribe in Oregon, and the Little Traverse Bay Bands of Odawa Indians in Michigan. The Supreme Court decision in Obergefell in 2015 does not affect Native-American tribes.

For more about marriage, see When Can I Get Married?

On May 9, 2012, President Barack Obama stated that he believes same-sex couples should be allowed to get married.

In October, 2017, the Ak-Chin Indian Community tribal court in Arizona announced that same-sex couples have a fundamental right to marry under the tribe’s constitution and the Indian Civil Rights Act of 1968. The ruling only applies to the tribe but could lead to other tribes doing the same in similar cases.

In November, 2020, Nevada became the first state to protect same-sex marriage by adding an amendment to their state constitution stating such. The presidential election on November 3, 2020 was accompanied by state elections for a host of public offices as well as ballot propositions. The election saw the end of Donald J. Trump’s administration and the election of former vice-president (under Barack Obama) Joe Biden and Kamala Harris as president and vice-president.