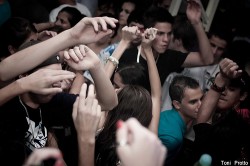 It’s prom and graduation season, which means that there is an increase in the number of teens partying and consuming alcohol. Many parents believe that they can teach their teens to drink responsibly by supervising their alchol consumption at home. However, parents and teens must realize that supervised parties and drinking can lead to serious and even tragic consequences.

1. 100 deadliest days for teens. Underage drinking and risky behavior tends to peak during this time of year between prom night, graduation and then summer. According to the National Highway Traffic Safety Administration, more than three people under the age of 21 die each day in alchol-impaired driving crashes. Car accidents are the leading cause of death among teenagers. According to the Partnership at Drugfree.org, 90% of teens anticipate that their friends will drink and drive on prom night. If you haven’t already done so, parents and teens should agree to sign a Contract for Life and both agree to not drink and drive.

2. Cracking down on the hostess with the mostess.

Social host laws impose liability against anyone who hosts an event where underage drinking takes place. In Minnesota, one woman thought she was doing the right thing by supervising minors drinking at her home. She was prosecuted and sentenced to 90 days jail, no drinking for one year and supervised probation for one year with random alchol and drug testing. To find the specific social host and underage drinking laws in your state, click here.

3. Teaching responsible drinking habits backfires. A recent study involving American and Australian teens showed that minors who were permitted to drink with adult supervision were more prone to problems with alcohol including binge drinking and passing out than the teens who were told to wait until they are 21.  Also, some studies have shown that kids who start drinking before they are 15 are four times more likely to become alcoholics. 4. This is your brain on beer. An adolescent’s brain is not fully developed until the age of 25. The American Medical Association has stated the risks of alcohol consumption on the adolescent’s brain, “The brain goes through dynamic change during adolescence, and alcohol can seriously damgae long- and short-term growth processes…damage from alcohol at this time can be long-term and irreversible.” Find out more about alcohol’s effects on the developing brain.

5. Teens, booze and risky behavior. In addition to driving under the influence, other behaviors that studies have shown put teenage drinkers at risk include using cocaine (one study showed that teen drinkers are 50 times more likely to use cocaine than their peers who have never taken a drink); being sexually active and having multiple partners which increases the risk of pregnancy and STDs; and engaging in binge drinking (having five or more alcoholic drinks in one episode of drinking).