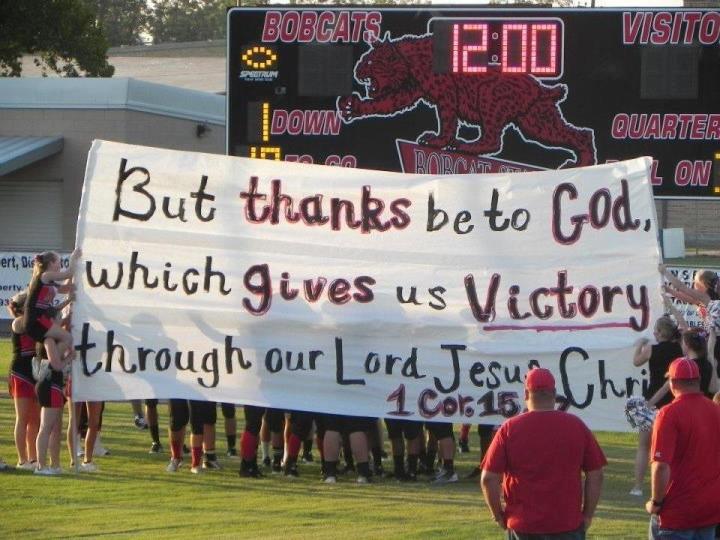 The Kountze High School cheerleaders in Texas thought the run-through banners they made were a non-issue since they’ve been around for decades. Recent complaints, however, resulted in a ban of the banners in September, 2012. They had already been used at three home football games when the school district superintendent banned them.

The cheerleaders made the 20 by 10 feet high banners during the summer. They used their own materials and chose the inspirational messages without adult supervision. Some included quotes from the Bible with a reference to the verse. No faculty or school official was involved.

Some of the girls on the team objected to the ban. They and their parents filed a lawsuit* requesting an injunction from enforcing the ban. The state court judge granted their request. Another hearing is scheduled in October and in the meantime, the banners may be used at sporting events. At the hearing on October 18, 2012, the judge continued the injunction meaning the use of the banners is allowed to carry on until at least a trial is conducted in June, 2013.

The issue as you know is separation of church and state. The First Amendment prohibits government from establishing or endorsing religion or prohibiting the free exercise of such. Any act that supports a particular religion in a public school has been held unconstitutional by state and federal courts including the U.S. Supreme Court. For more on this subject, click here.

In Santa Fe Independent School District v. Doe,** the Supreme Court ruled that student-led, student initiated prayer at another Texas high school violated the Establishment Clause because the prayer offered at a football game was said over the school’s public address system at a school-sponsored event that represented the student-body and was under the supervision of the school’s faculty. The Court ruled that the Constitution demands that schools not force students to choose between whether to attend the sporting events or to risk facing a personally offensive religious ritual. 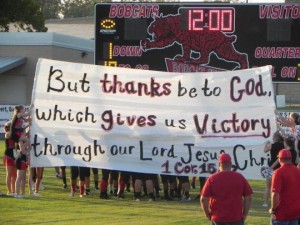 How do you think the court will rule on these religious banners? Could they be offensive to non-Christian students or should they have to accept it if they choose to go to this particular public high school?

Update: In May 2013, the Texas judge ruled in favor of the cheerleaders stating, “The Kountze cheerleader’s banners that included religious messages and were displayed during the 2012 football season were constitutionally permissible,” said State District Judge Steve Thomas. “Neither the Establishment Clause nor any other law prohibits cheerleaders from using religious-themed banners at school sporting events.” The summary judgment ruling eliminated the need for the case to go to trial.