When Paul “Pete” Palmer was a sophomore at Waxahachie High School in Dallas, he wore a “John Edwards 2008” T-shirt to school. The school’s dress code prohibits all “non-school messages” on clothing.  However, the school did allow other forms of political speech such as campaign buttons and stickers on backpacks.

Pete was reprimanded and told he’d be suspended if he violated the code again.  He and his parents sued the school district for violating his First Amendment right to free speech.  He claims that there was no disruption at school as a consequence of his shirt or its message.  He is asking the court to prohibit the school district from enforcing its dress code. 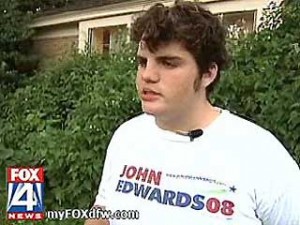 In 2008, Pete lost his case in the lower federal court.  He appealed the decision to a higher court and the 5th Circuit Court of Appeals ruled in the school’s favor on August 13, 2009.  Pete will be a senior in the Fall of 2009.

Update:  In October, 2009, Pete filed a petition for review before the United States Supreme Court. In January, 2010, the Supreme Court declined Pete’s request to review the case, which means the lower court’s ruling stands.

Do you think students should be allowed to express their views through messages on their clothes?  Do you see a distinction between messages on T-shirts and displaying a campaign button or sticker?  If the school’s policy banned all messages including buttons and stickers, would that violate the First Amendment?

Know your rights about dress codes at school.