Can you yell anything you want at a sporting event? 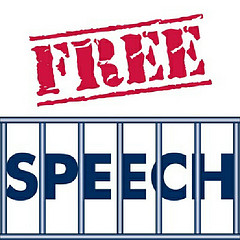 An article in a recent issue of Upfront* magazine caught our attention about a subject we haven’t covered before. The issue regards your rights at any public event such as a football or basketball game – can you yell anything you like or is there a limit in criticizing the other team, the referees, etc?

Many years ago, Supreme Court Justice Oliver Wendall Holmes wrote that you can’t shout “Fire!” in a crowded theater as a joke and expect nothing to happen. Free speech is not absolute – it is limited and depends on the circumstances. You have read in many posts on AsktheJudge.info about teens who have expressed themselves online or by cell phone and gotten into trouble.

So, are there limits at a public event? Some schools have rules in place regarding carrying signs into the gym or onto the field. Others have tried limiting abuse of participants in the game but there isn’t an overall rule about this nor has the Supreme Court ever addressed this free speech issue.

An example cited by Upfront involved a basketball game in 2012 between two colleges. Two former players were in the stands and loudly protesting some of the referee’s calls. Security ejected the spectators from the game. This raises the question of what, if any, rights do fans have at a public event? There are rarely lawsuits filed over this because many believe that once admitted to the game, there are limits on behavior and disrupting those around you. Ejections are generally accepted as par for the course with no follow through by the fan.

As a student you know the rules set out in your Student Handbook. Disruptive or offensive behavior at any school event will result in expulsion from the premises. Similarly, speech that is already considered unprotected by the First Amendment (obscene speech or words that incite violence) will result in action against the speaker. The bottom line, with or without a judicial pronouncement on the subject, is to choose your words carefully and respect those around you. The presence of children is also a consideration when assessing someone’s outburst or rant. Common sense and decency should be the guiding factor in these instances.