Honor student Richard Wade is a 12-year-old student at Southaven Middle School in Mississippi.  During a football session in 2008 he received a text message from his father.  Thinking it might be an emergency, he read it.  His phone was confiscated for violating school policy against cell phone use during school hours.

Instead of turning the phone in to the front office and holding it until the end of the day, as school policy called for, school officials searched it for evidence of inappropriate content.  They discovered what they described as photos of “gang related activity.”  The phone was turned over to the police and Richard was suspended for three days. 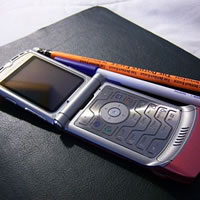 The following week a disciplinary hearing was held and the school determined that Richard posed a threat to school safety.  The police argued that they recognized gang signs in the photos.  Richard explained that they were pictures of him dancing at home in the bathroom, and of a friend holding a BB gun across his chest.  Richard was expelled from the school.

In August, 2009, Richard and his mother filed a civil lawsuit in federal court.*  They claimed a violation of Richard’s right to be free from an unreasonable search and seizure. They also seek to have the incident removed from his academic, disciplinary and law enforcement records.

What do you think? Should students expect privacy on their cell phones at school?  How do you balance student privacy with a school’s obligation to maintain a drug and weapon-free campus?  Should school officials be required to have reasonable suspicion or probable cause before they search a confiscated cell phone?

Update: In February, 2011, a settlement was reached between the parties. No figures were released but it was announced that the legal expenses of Richard’s attorneys (ACLU) were covered. The school clarified its gang policies including a list of prohibited gang symbols. Chek out the school’s new policy here.

On June 25, 2014, the Supreme Court ruled 9 to 0 that a search warrant is needed before conducting a search of someone’s cellphone when arrested. The Court left room in the rare case when special circumstances exist for a warrantless search but the general rule now calls for a search warrant before looking at the content of a cellphone. See Riley v. California. Although the Court did not speak about schools, it’s strong support of the Fourth Amendment and its protections will most likely apply to the school setting when the issue comes up.