19 year old Makaio Bachman-Majamay worked at a Subway in Wailuku, Hawaii. While on break he stepped outside for a smoke with a friend. He flicked the cigarette butt onto the roof of a bar-be-que restaurant next door. Someone saw the shake roof catch fire and tried to put it out. Firefighters were able to save the building.

Makaio was charged with third-degree arson. Since his act was reckless and not intentional, he was allowed to plead no contest to a reduced charge of third-degree criminal damage. In September, 2009, he was sentenced to one year probation including 60 community service hours, and restitution of $1,025 for repairing the roof. 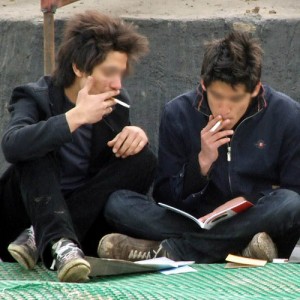 The judge also ordered Makaio not to smoke or use any tobacco product for one year. The judge commented that “Perhaps it will add about 10 to 15 years to his life if he stops smoking permanently.” If Makaio follows all of the court’s orders he may avoid an adult criminal record.

Was the judge too harsh with Makaio? Should a court get involved with personal habits like smoking? What if, as in this case, it’s related to a crime?