This was 11-year-old Tyson Gibbs’ comment following a school assembly at Lowe Elementary School in Kentucky. A new judge was appointed and he chose to hold his swearing-in ceremony at his childrens’ school.

So, 4th grader Mason and his sister, 2nd grader Madison got to see their father, Mason Trenaman, Sr. take the oath of office at their school. They held the Bible during the ceremony and their mother helped the new judge into his new, black judicial robe. 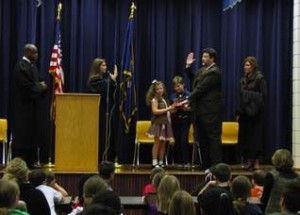 Before the formal swearing-in took place, Judge Trenaman and two other judges spent an hour with the students answering questions. They included what is the most common reason people have to see a judge (drugs); whether any of them had sentenced anyone to death (no); and what Judge Trenaman hoped to accomplish as a judge (to make a difference and make the right decision in each case).

The three judges used this opportunity to talk to the students about staying in school, setting goals and working hard to achieve them regardless of obstacles.