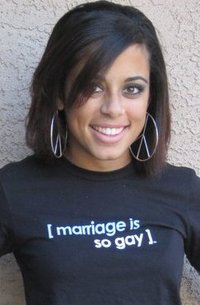 In the past couple of weeks, two high schools in different states have prohibited students from wearing the same pro-gay marriage t-shirt to school. In Colorado, Kate Cohn explained that she wore the “Marriage is so gay” t-shirt to school in support of gay marriage and that some of her friends and family are gay and do not receive the same rights as heterosexuals.

A spokesperson for the school explained that the principal acted within the parameters of the dress code policy by insisting that Kate change shirts since any “obscene, lewd  or anything that might be disruptive to the educational environment” can be banned by the school. Although the school took no disciplinary action such as suspending Kate, she was forced to change her shirt.

Kate believes that the school’s ban of the shirt constitutes a double standard since anti-abortion and Christian shirts have been worn and accepted by her school. In addition, when she asked her principal if she could wear a “Legalize Gay Marriage” t-shirt since it would be more straight to the point, her principal shot down the idea stating it also would be unacceptable. 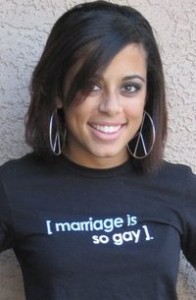 We asked Kate why she feels strongly about this issue and being allowed to wear the t-shirt at school and express her views. This is what she had to say, “My shirt is being discriminated against only on the basis that it is a controversial topic and the majority of Falcon, Colorado is anti-gay marriage. It is both un-ethical and un-constitutional and I will not just sit down and give up because they tell me to. I will do what I have every right to do as an American citizen. If Martin Luther King Jr. or Rosa Parks had given up because others disagreed with them I wouldn’t have the rights I do now. If I give up someday Gays still may not have the rights they are entitled to.”

In another incident involving 16 year old Zachary Patterson in Wisconsin, he wore the same “Marriage is so gay” t-shirt to school and was told that failure to remove the shirt could result in a two-day suspension. School officials believe the shirt is inappropriate because it could be offensive to homosexuals and that it’s not clear whether it’s in suport of or opposition to gay marriage.

Update: One day after the ACLU of Colorado got involved with Kate’s case and sent a letter to her school outlining Kate’s First Amendment rights to free speech and expression at school that does not cause a disruption, school officials told Kate that she can wear her shirt.