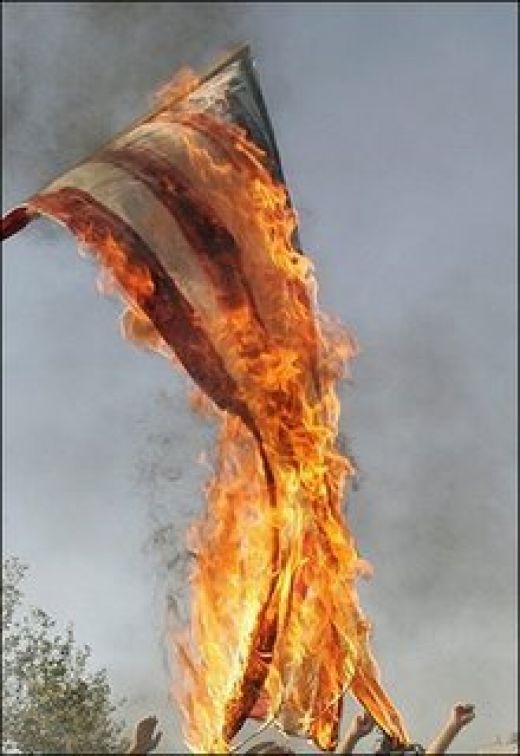 You may not have heard of the Westboro Baptist Church in Topeka, Kansas but the families of soldiers killed in Iran and Afghanistan have seen and heard from them.

Church members believe that the death of U.S. troops is punishment for the nation’s immorality and tolerance of homosexuality and abortion.  They travel the country protesting at military funerals. They trample on the U.S. flag, wear and display it upside down. 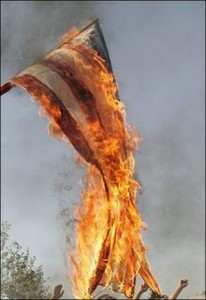 In 1977, the state of Nebraska passed a law banning anyone from intentionally “casting contempt or ridicule” upon a U.S. or Nebraska flag by mutilating, defacing, burning or trampling on it. Megan Phelps-Roper, a member of the Westboro Baptist Church, filed a lawsuit claiming the law infringed on her right to free speech.

In September, 2010, a federal judge ruled in favor of the church. U.S. District Judge Richard Kopf said the state law cannot be applied to the church’s activities regarding the flags unless the protests resulted in violations of other laws such as trespassing or disorderly conduct. As long as the protests were peaceful, their actions toward the flags were protected speech.

The United States Supreme Court had already decided the issue in 1989 in the case of Texas v. Johnson.* In 1984, 27 year-old Gregory Lee Johnson burned an American flag at the Republican National Convention in Dallas, Texas. He was protesting policies of the Reagan administration.  Texas law protected desecration of the flag and Johnson was convicted and sentenced to one year in jail and a $2000.00 fine.

In a 5 to 4 decision in 1989, the Supreme Court reversed the conviction. Johnson’s burning of the flag was protected expression under the First Amendment. The court held that “. . .if there is a bedrock principle underlying the First Amendment, it is that the Government may not prohibit the expression of an idea simply because society finds the idea offensive or disagreeable.”

In an earlier case,** the Supreme Court reversed the conviction of college student Harold Spence for “improper use” of a flag. Harold hung a 5′ x 3′ American flag upside down from his apartment window in protest of the U.S. invasion of Cambodia in 1970 and the Kent State killings. He also attached a large peace symbol covering half of the flag. The Court determined that his act of political expression and symbolic speech was protected under the First Amendment. About the same time, the Court approved the wearing of an American flag patch on clothing (specifically a back pocket): Smith v. Goguen, 415 U.S. 566 (1974).

As you see, a state law may remain on the books and enforced even after the Supreme Court has ruled on the issue declaring such a law unconstitutional.  It took a separate lawsuit to declare the Nebraska law invalid after the 1989 Supreme Court decision. Does this surprise you? Wouldn’t you think once the highest court rules on an issue that all states would fall in line? States’ rights are guaranteed by the U.S. Constitution and Bill of Rights. Consequently, they may maintain their respective positions on social issues until challenged in a court of law, as Megan Phelps-Roper did in this case.

*Texas v. Johnson, 491 U.S. 397 (1989); Johnson appeared at the 2016 Republican National Convention in Cleveland, Ohio. Again, he and others burned the American flag and were charged with various offenses. Most of the charges were dropped, but Johnson still faces trial for allegedly assaulting two people during the convention.

Gregory Johnson arrested in Dallas in 1984

Update on protesting at funerals case: In an 8 to 1 decision,*** the U.S. Supreme Court ruled in March, 2011 that the free speech rights under the First Amendment of the Constitution protect the members of the Westboro Baptist Church to protest homosexuality at military funerals. “As a nation, we have chosen … to protect even hurtful speech on public issues to ensure that we do not stifle public debate,” stated Chief Justice John Roberts writing for the majority. In another lawsuit involving the same church, the Eighth Circuit Court of appeals ruled on October 16, 2012, that the ban passed by the town of Manchester, Missouri can be enforced since it “survives First Amendment scrutiny because it serves a significant government interest, it is narrowly tailored, and it leaves open ample alternative channels for communication.” This decision will likely proceed to the Supreme Court for review.