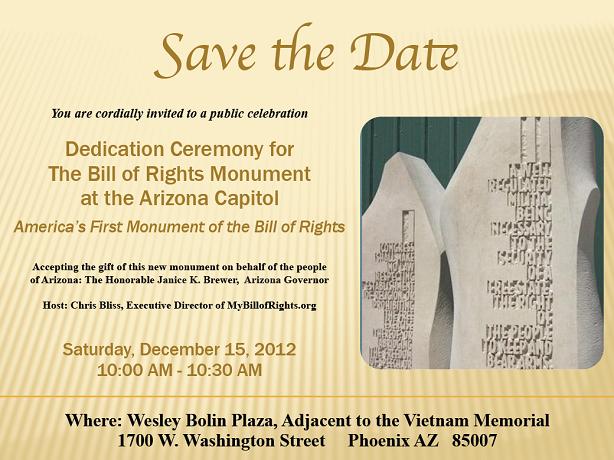 Today, December 15, 2012 is Bill of Rights Day in America. President Franklin Delano Roosevelt designated every December 15th as a day to remember our good fortune in living under a document of less than 500 words. It was passed in 1791 and is the foundation of our most cherished freedoms.

The Bill of Rights consist of the first ten amendments to the U.S. Constitution (there are 27 Amendments). At some point in your education you have probably studied some of these amendments. Basically, the Bill of Rights guarantees every individual the following rights: 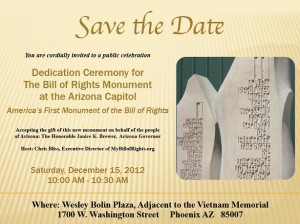 Particularly noteworthy today is a memorial to the Bill of Rights being dedicated in Phoenix, Arizona in the capitol plaza. It is reported to be the nation’s first such memorial. Conceived by Chris Bliss, a comedian by trade, in 2004. It took years to pitch the idea and gather support for the project. The monument cost $400,000 which came from fundraisers, private and corporate donations.

We congratulate Chris and all supporters of this endeavor. Regardless of your political affiliation, as one writer commented, who can say no the the Constitution?