What will it take for Congress to act on gun control? 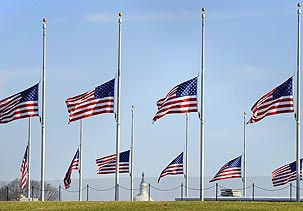 You may be on your Christmas or winter vacation from school and won’t have a chance to discuss this in class until you return. We thought we’d throw out some thoughts about the Sandy Hook Elementary School shootings on December 14, 2012.

Undoubtedly, there will be ample discussion across the country about school safety, gun control, metal detectors, etc. It may be time for our leaders in local, state and federal government to do more than posture themselves for re-election. Now that six and seven-year-old children have become targets, we need to act in the interest of all citizens. What will the next miscreant do – shoot up a nursery in a maternity ward? Will that get the attention of Congress to consider rational gun control or is the Second Amendment so inviolable that there is no limit? Or would a shooting at a school where politicians’ children attend wake them up? We face serious questions about our future and culture as a people.

In January, 2011, nine-year-old Christina-Taylor Green was the youngest victim of a parking lot shooting spree by a 22-year-old man in Tucson, Arizona. Her death caused a torrent of attention to stricter gun control laws since now a child was sacrificed to our insistence on not messing with the Second Amendment. It allows any adult to own weapons to protect his life and property. Exceptions are recognized but gun-control advocates want greater restrictions on the sale of certain high-caliber weapons, ammunition and clips (magazines that hold dozens of bullets). As it stands today, ownership requires registration and a background check but these rules don’t apply to private sales or sales at gun shows. The passing of a nine-year old child from gun violence resulted in little change in either the law or culture surrounding the Second Amendment debate. Now we have twenty children sacrificed on the altar of “gun rights” and personal freedom. 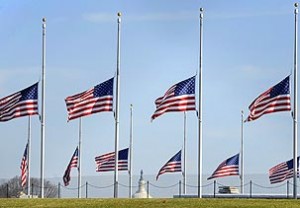 Flags at half-mast in Washington, D.C.

It’s somewhat ironic that the following day, December 15, 2012, marked the 221st anniversary of the Bill of Rights. The nation’s first memorial* to the Bill of Rights was dedicated in Phoenix, Arizona. The memorial consists of ten stone monuments standing ten feet tall. Each has the words of the Amendment carved into its surface. As you know, several of the amendments come into play regarding the issue of gun control in America. Obviously, the second amendment which states: “A well regulated Militia, being necessary to the security of a free State, the right of the people to keep and bear Arms, shall not be infringed.” Also the First Amendment guarantee regarding free speech protects all discussion about the remaining amendments including the vigorous debate about the Second Amendment.

Talk with your family and friends about this. Isn’t it time for lawmakers to do something to protect innocent victims from gun violence? Should the basis of legislative decision-making be an individual’s personal future as an elected official or financial gain? Even if taking an unpopular stand on the issue means personal loss, doesn’t ethics and morals come into play? Or is our society solely about the bottom line to each politician, corporation or organization?

Compromise is not a dirty word. Although it’s a painstaking development in current politics, shouldn’t a middle ground be sought on this issue? Two centuries of debate over the meaning of the Second Amendment will not give way to one side or the other. But compromise over rational changes to both ensure the individual’s right to own firearms balanced against the need to keep weapons from some persons should be attainable. Loopholes in the law must be closed. We have reached a tipping point where a national discussion on the subject must be followed by action.

Update: On November 5, 2017, a 26 year-old man approached a small church in Sutherland Springs, Texas, with an assault rifle. He opened fire and massacred 26 people, including a dozen children. He fled the scene and was stopped a few miles away where he died from gunshot wounds. This incident is the second highest figure of children becoming victims from gun violence since the Sandy Hook tragedy in 2012. What has Congress done in the past five years? What will they do now? Has anything been done about reasonable gun control since 58 people were slaughtered in Las Vegas, Nevada in October, 2017 by assault weapons? It is doubtful that Congress will do anything in spite of the fact that the majority of Americans favor common-sense gun control measures. The NRA owns the majority of members in Congress, and not until personal tragedy falls upon voting members and NRA officials will there be any changes to our “wild west” mentality. Our children will continue to pay a high price for people who refuse to do the right thing and be the adult in the debate.