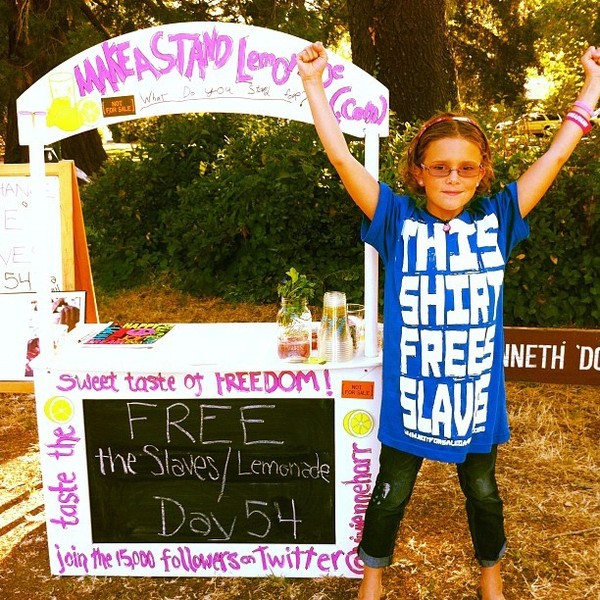 This is Vivienne Harr’s story as told by the 8-year-old herself.

i was on a trip to sonoma, california with my family. we walked into an art gallery and we all went quiet when we saw the work of lisa christine. her book “slavery” told the story of child slaves and i learned that there are almost 30 million slaves in the world today including a lot in America and most are kids! one photo really did it for me. it is of two child slaves, holding hands, and I imagined if that were my brother Turner (2) and me. it made us all cry.

i turned to my mom and dad and said: “we need to make a stand against this.”

so, we did! since june 25, i have been setting up my lemonade stand every day. i will do this until i raise $150,000 for not for sale.  it is hard, but that’s what “making a stand” means, right? it means making a stand for what you believe in. every day. no matter what. 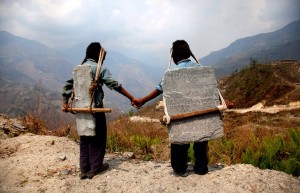 Photo by Lisa Kristine from "Slavery"

Vivienne and her family have raised over $30,000 for Not for Sale, a non-profit organization dedicated to ending human and child slavery and trafficking. She also created a website for donating to her campaign:  makeastandlemonade.com. Reports from the field say the lemonade is pretty good. It’s made from fair trade lemons, agave nectar, fresh mint and optional raspberries. Her stand is named “Make a Stand! Lemonade: The Sweet Taste of Freedom.”

The deadline for contributing to Vivienne’s cause is December 23, 2012. That’s Vivienne’s birthday and she wants to send a check to Not for Sale on that day. However, she plans to continue her work. As she explained,  “i want to end slavery in my lifetime. and i will MAKE A STAND on that and never quit until it happens.”

AsktheJudge is proud to include Vivienne in our gallery of Rock Stars. 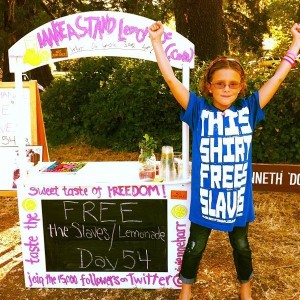