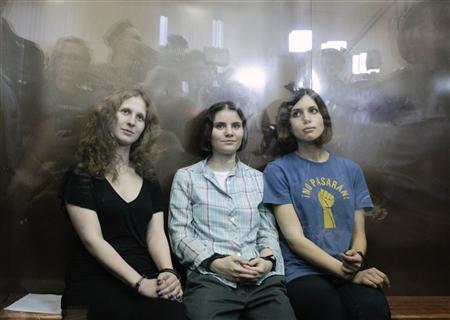 Yes, believe it or not, being a “hooligan” in Russia is illegal. This is the equivalent in the U.S. of disorderly conduct or disturbing the peace. In Russia, it can lead to years in prison. Three young women found this out the hard way in August, 2012.

Protesting the campaign of Vladimir Putin to become Russia’s new president in March, 2012, the punk-rock style activists took over a cathedral in Moscow. They performed for less than a minute in what some called a raucous prayer for deliverance from Putin and the Russian Orthodox Church.

Nadezhda Tolokonnikova, age 22, Maria Alekhina, age 24 and Yekaterina Samutsevich, age 30 were arrested in March after briefly taking over a service at Christ the Savior Cathedral in Moscow. They sang a prayer calling on the Virgin Mary to save Russia from Putin who was elected to a third term as president two weeks later. The judge overseeing their trial found that they had “committed  hooliganism driven by religious hatred.” The girls were three members of the band Pussy Riot and were known for speaking up on issues and staging impromptu performances in unusual locations. 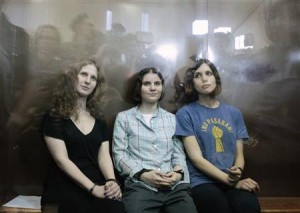 Sentencing was held in August, 2012. Protesters stood outside the court building in the Kremlin and included journalists, prominent writers and supporters of the band members. They were sentenced to two years in prison even though Putin said they shouldn’t be judged too harshly. There was an expectation that they would be sentenced to time-served and released in the courtroom. Protests erupted in Moscow and other cities including New York City. It was reported that Paul McCartney and Madonna condemned the prosecution of the girls and support came from Genesis, Yoko Ono, Peter Gabriel and others.

Update: In November, 2012,  a court in Moscow banned the video of the girls in the cathedral from the web as “extremist.” Three other videos of the group were also banned. 2013: In a show of good faith in advance of the Winter Olympics in Sochi, Russia, Putin released the band members along with hundreds of other political prisoners.

This event makes you stop and appreciate the freedom of speech enjoyed in the U.S. and many other countries. Our right to free speech isn’t absolute, but exercise it wisely and often.

Consider these nations that impose strict penalties on what are considered offenses against the public good:

China has an anti-rumor law that prohibits online posting of false statements. If such a post is viewed more than 5,000 times or reposted more than 500 times, the writer is subject to prosecution. In September, 2013, 16-year-old Yang Hui criticized local police for their handling of a murder. He was arrested and jailed. Public outcry resulted in his release a week later.

In August, 2012, the arrest of an 11-year-old girl in Pakistan for allegedly burning pages of the Quran, the Islamic holy book; imprisonment in Thailand for defaming or insulting the king; arrest and fines if you insult the president in Zimbabwe; imprisonment in Indonesia for distributing Christian books that allegedly spreads hatred about Islam; one year in jail for a rapper in Morocco for a song about police corruption; and up to three years in prison in Lebanon for insulting the president or religions.