What is Title IX and how does it affect me?

In 1972, Congress passed the Equal Opportunity in Education Act, popularly referred to as Title IX (sometimes referred to as Title 9).  The intended purpose of the law is to eliminate discrimination on the basis of gender in public and private schools that receive federal funds.

Most public schools receive federal funding. Even if a school receives a portion of their budget from the government,  Title IX applies to the school’s programs and policies.

Although Title IX does not specifically mention sports, the Act is best known in its application to high school and college athletics.  The relevant words of the Act are:  “No person in the United States shall, on the basis of sex, be excluded from participating in, be denied the benefits of, or be subjected to discrimination under any educational program or activity receiving Federal financial assistance.” 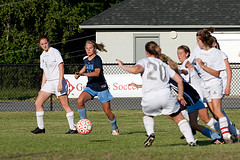 Consequently, Title IX covers all educational activities including science and math courses, health care at school, band, cheerleading and clubs. Sports scholarships between boys and girls must be equal. Schools and universities that fail to comply with Title IX may be sued for damages.

Whether “equal treatment” exists at a school is based on a number of factors: levels of competition and the abilities of members of both sexes; provision of equipment and supplies; scheduling of games and travel time; locker rooms and practice facilities; medical facilities; and operating single-sex classes when appropriate.

The law does exempt some groups from the Title IX requirements such as fraternities and sororities, Girl Scouts and Boy Scouts, and Girls State and Boys State.

An unexpected development stemming from the passage of Title IX were non-school sports leagues that opened competition to men and women. Some golf tournaments, auto racing, sailing and equestrian events now include girls and women.

Also some states have passed their own legislation prohibiting discrimination in athletic opportunities based on sex, regardless of federal funding.

For a story about girls in baseball and other female barrier-breakers, click here. In 2012, 17-year-old Erin DiMeglio of South Plantation High School in Florida became the state’s first female football player on a high school team. She is the third-string quarterback and played in the same position on the girls’ flag football team.

Update: The summer Olympics were held in London, England in 2012. On the 40th anniversary of Title IX, women representing the United States brought home the majority of medals – 58 in all over the men’s 46.