In February, 2008, an envelope containing $5.00 was missing from the teacher’s desk. It was decided that the 17 third-graders at Martin Luther King Elementary in Kentucky would be searched. They were asked to take off their shoes and socks, and some were patted down and had their pockets checked.

The physical contact with the kids violated school policy and the four instructors involved received a written reprimand. Physical contact is limited to kids who pose a threat to themselves or others. The search failed to turn up the missing money. 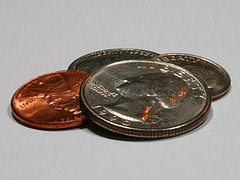