Do I have complete freedom of expression in school? 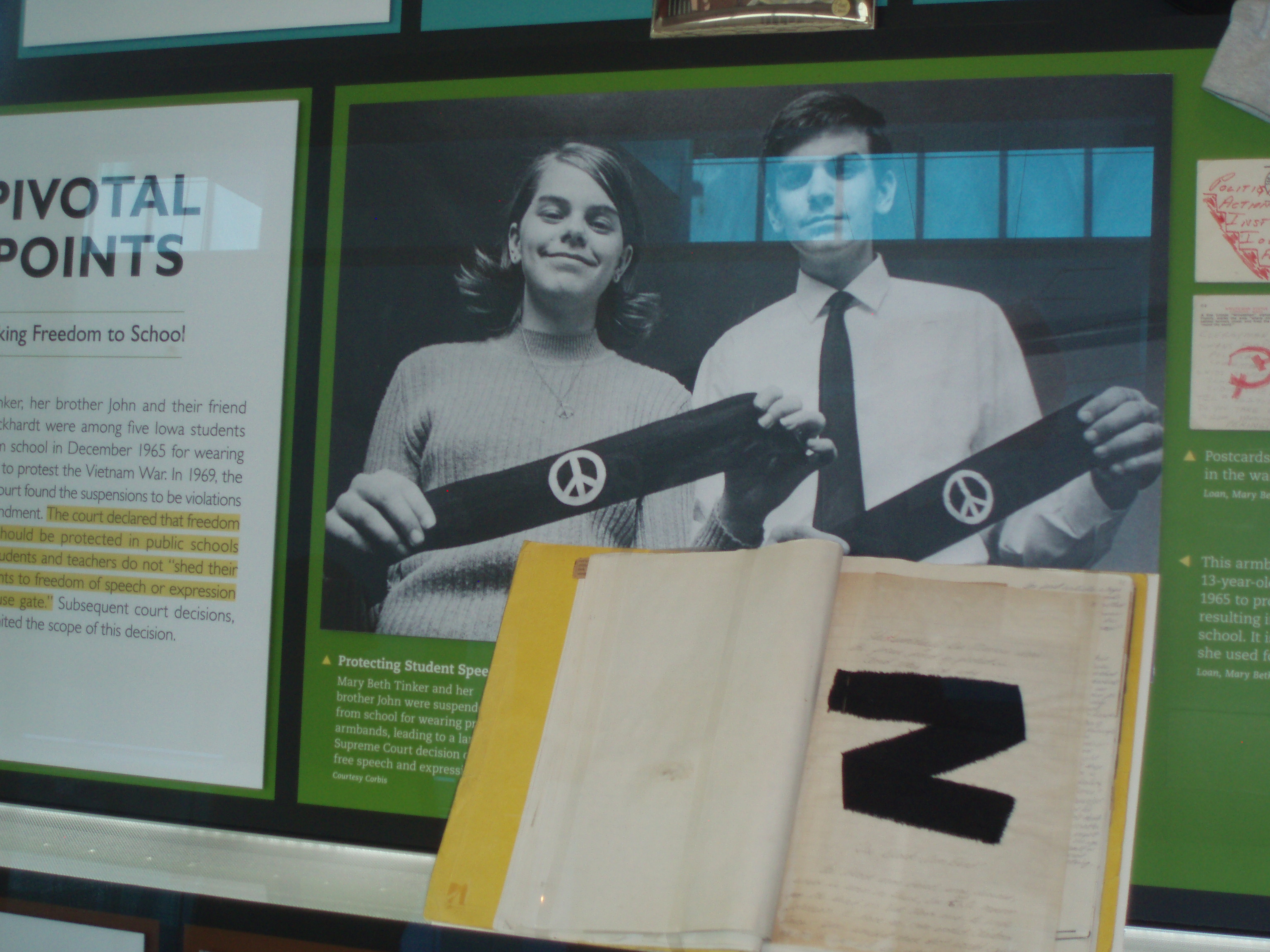 Although students have First Amendment rights in the school setting, no one, whether a juvenile or adult (student or not), has complete freedom of expression without some limits. The government may place reasonable restrictions on our freedoms. For example, city laws about loud noise at night, dancing in the street, or trespassing after hours in a park have all been found constitutional.

Likewise, students and teachers aren′t free to do anything they choose in the name of free speech or expression. Consider this example from Hazelwood School District v. Kuhlmeier,* the 1988 Supreme Court decision:

My father “wasn′t spending enough time with my mom, my sister, and I” before the divorce—he “was always out of town on business or out late playing cards with the guys” and “always argued about everything.”

These statements are from a high school journalism class about the impact of divorce. Other class articles covered teen pregnancy, sexual activity, and birth control. They were scheduled to be printed in the school newspaper. The principal, thinking that using the student′s name in the quoted passage would offend her parents, and that the pregnant teens could be easily identified, withheld the stories from publication. A lawsuit was filed by the newspaper staff, claiming a violation of their First Amendment freedom of expression.

What do you think? Should the stories have been printed? Should there be a limit on what goes into your school newspaper?

The court ruled that since the paper wasn′t a forum for public expression, but would be publicly distributed, the school could exercise control over its content. Teachers are charged with seeing that student activities and personal expression at school are consistent with educational objectives. Offensive, vulgar, or racist expressions may be censored in print, in campaign speeches, and in theater productions. 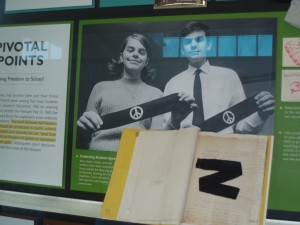 “Students and teachers do not shed their constitutional rights to freedom of speech or expression at the schoolhouse gate.”
— U.S. Supreme Court in Tinker v. Des Moines Independent School District (1969)

In a 1996 case, the court spoke of balancing a school′s interest in prohibiting profanity with a teacher′s interest in using a certain method of teaching creative writing. Cecilia Lacks was a tenured teacher who taught English and journalism at a Missouri high school. One of her assignments was to write and perform short plays. The classroom productions were taped by a school employee. Upon viewing six of the plays and reading two of the students′ poems, the school board found that they contained “extensive profanity,” which violated school rules. They fired the creative writing teacher. She sued the school district for reinstatement and back wages—and she won.

The court recognized that schools have broad authority to prohibit student profanity. It further stated that it′s appropriate to consider the age and sophistication of the students, the relationship between the teaching method and educational objective, and the context and manner of the presentation. Because the context of the offensive language was part of a valid educational objective and not publicly distributed, the court decided it was improper to terminate the teacher.

But the court also wrote,“A school must be able to set high standards for the student speech” that is generated at school. Schools may censor expression that is “poorly written . . . biased or prejudiced, vulgar or profane, or unsuitable for immature audiences.”

Read more about Cathy Kuhlmeier and her classmates who challenged the principal’s censorship of their work on the school newspaper in “Teens Take It To Court [Young People Who Challenged the Law and Changed Your Life]” by Free Spirit Publishing (2006).

Find out more about the landmark Tinker case and the 2007 Supreme Court decision regarding Alaska senior Frederick Morse his poster “BONG HiTS 4 JESUS.”   In February, 2009, it was the 40th anniversary of the Tinker decision with a program that included interviews with Mary Beth Tinker.  Watch this video about the Tinker case and how it has affected students’ free speech rights for the past 40 years.

Update on effect of Hazelwood: In February, 2008, the U.S. Supreme Court refused to review a California case regarding newspaper censorship. Andrew Smith was 18 when he wrote a column about immigration for his school’s paper, The Buzz. The article resulted in a protest at school, seizure of the remaining copies of the paper, and a letter of apology from the principal to the parents.

Andrew sued the school district for violating his free speech rights. The court determined that Andrew’s rights had been violated. Under California’s education code, students have freedom of expression except when it is obscene, libelous or slanderous, or substantially disruptive or incites unlawful acts. [see Smith v. Novato U.S.D., 2007 WL 1464617 and 2008 WL 432621].

In another incident, a construction worker yelled to a passing lady “How do you like your eggs? Scrambled, over easy, or fertilized?” This was one of several objectionable lines in “Catcalls,” a one-act play by senior Peter Keahey at Yellow Springs High Schol in Ohio. The school’s One Acts were written and directed by the students for a fundraiser in February, 2008. Peter was asked to change the lines but didn’t have time and preferred not to. One Acts had one less.

In February, 2008, senior Megan Estes, editor of The Elk, the school yearbook at Burleson High School in Texas, was instructed to edit a story about a student who was a teen mother. The intent of telling Brittani Shipman’s story was to show how her life had changed and how she was coping with motherhood. Brittani agreed with the story being told in The Elk. The principal censored it because it “glamorized” premarital sex and violated the school’s policy on abstinence.

In June, 2008 the Shasta High School  newspaper in California, The Volcano, featured this picture and an editorial about the principle of free speech. As you can see the flag is burning – the article read in part “. . . to burn the flag is the penultimate embodiment of the tolerance America has towards . . free speech. . . The day an American cannot burn the flag, the day he cannot denounce his country, is the day America is no longer free.”

The school principal was offended and announced that the paper would be eliminated when school resumed in September. It may have been cut anyway due to budget constraints but this last issue of the school year clinched it for Principal Woollard. The school superintendent, a Vietnam veteran, was also offended but understood the need to keep the paper going. He announced two days later that the newspaper would remain at the school. California law prohibits censorship of student newspapers unless they contain material that is obscene, libelous, or likely to incite students to break the law or disrupt the school.

In 1989, the U.S. Supreme Court ruled in Texas v. Johnson (491 U.S. 397) that burning the American flag was protected speech and that a demonstrator could not be criminally prosecuted.  In two earlier Supreme Court cases, the alteration and desecration of the American flag was determined to be symbolic speech and, as such, protected under the First Amendment. In one case (Smith v. Goguen, 1974) a teenager wore an American flag patch on the seat of his jeans. Valarie Goguen was prosecuted, found guilty by a jury and sentenced to six months in prison. In Spence v. Washington (1974) Harold Spence flew the American flag upside down in his apartment window with a peace symbol taped on it. He was also coinvicted and sentenced to a fine and ten days in jail. In both cases the convictions were reversed.

In September, 2008, a federal court in Arkansas supported the rights of Watson Chapel Junior High students who protested their school’s dress code. The court said they had a right to speak under the First Amendment. Chris Lowry, Colton Dougan and Michael Joseph wore black armbands to school as a silent protest against the school’s uniform policy. They were disciplined by the administration and, with their parents, decided to fight the school’s action. On March 2, 2009, The U.S. Supreme Court declined to hear the case which means it is over – the lower court’s decision in favor of the boys remains in effect. [see Lowry v. Watson Chapel School District, 8th U.S. Circuit Court of Appeals, 9/2/08]

In August, 2008, 12-year-old Amelia Robbins started the 7th-grade at Mountain Grove Middle School in Missouri.  When she was six, her father died of cancer and in his honor she died her hair pink with her mother’s permission.  Amelia is an A-student who simply wants to express herself in this manner. The Student Handbook prohibits any dress or style that distracts others at school. She was suspended and sent home until she gets rid of her pink hair.  She wants to return to school but is willing to stand up for her right to express herself.  Amelia doesn’t think she should have to change her hair “because I’m expressing myself as an individual, because they constantly tell us “be different, don’t follow the crowd.” Update: almost two weeks later, the school relented without comment and allowed Amelia to return to school, pink hair and all.

Update:  In October, 2009, a 32-year-old Saudi Arabian man was sentenced to 5 years in prison and 1,000 lashes. His offense? Mazen Abdul-Jawad spoke publicly about his sexual experiences since age 14 and displayed some sex objects. He was being interviewed on a Lebanese radio show and the tape made its way to YouTube. Under Sharia, the strict version of Islamic law, such subjects are not to be talked about in public. His lawyer said they will appeal the decision.