In May 2010, an order against a British teen banned him from wearing low-slung baggy jeans that hung below his waistline so that members of the public could see his underwear.

Ellis Drummond was convicted last month of assault, possession of drugs and theft. The original order restricting the way he dress also prohibited Ellis from wearing hoodies with the hood up. However, a judge reviewing the order ruled that it breached his human rights and was contrary to the Human Rights Act. Although he allowed Ellis to dress as he pleases, he issued a  four year order prohibiting Ellis from using threatening behavior, begging or entering the grounds of Bedford College. 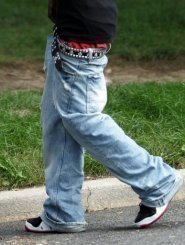 The banning of the baggy jean is not limited to the U.K. In 2007, several communities in Louisiana banned wearing  the low-riding pants in public. Voters in Florida also passed similar laws. The penalties ranged from a $25 to $500 fine or even a sentence of up to six months in jail. These communities have drawn on the indecency laws to pass such legislation.

However, the states where these laws have been challenged in court such as Florida have resulted in a finding that the laws are unconstitutional since they violate freedom of expression protected by the First Amendment.

Does it make sense to pass laws prohibiting certain styles of dress? Is it possible that wearing baggy pants leads to criminal conduct and a criminal lifestyle that can be prevented by prohibiting such pants? Or should we be left alone to wear whatever we want as part of our freedom of expression unless we are revealing too much skin resulting in indecent exposure?