Senior Connor Kennedy wrote the following editorial about free speech in the Shasta High School newspaper, The Volcano. His words accompanied by a photo of a burning American flag have caused a stir across the country.  In the case of Texas v. Johnson (1989)  the U.S. Supreme Court ruled that such an act is protected speech under the First Amendment although upsetting and offensive to many.

Staff Editorial: Because we can

” Those who would assume that the act of burning the flag is unpatriotic, could not be more mistaken. It may offend some and mortify others, or perhaps even provoke a genuinely violent response, but the reality is that it is protected speech, and to burn the flag is the penultimate embodiment of the tolerance America has towards the principle of free speech. 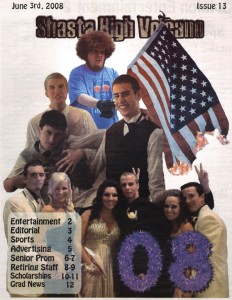 I must now address the veterans or actively serving members of the military who may be utterly mortified or disgusted by what they have seen and assure them that it is precisely what they have or are currently defending. The day an American cannot burn the flag, the day he cannot denounce his country, is the day America is no longer free. It is simply beautiful that we have this right, and it is what has allowed us to create the unique, diverse, and spirited culture that we so proudly boast. God Bless America and its burning flags too.”

What do you think of Connor’s view of free speech?  Are there or should there be limits to this cherished freedom? Is burning the American flag going too far in expressing a point of view? Share your thoughts with others and let us know what you think.

Although free speech is a protected right, there are responsibilities that accompany this freedom. In other words, the speech may be legal but at the same time ethically or morally wrong. Consider the case of a small church in Florida. In March, 2011, the Dove World Outreach Center conducted a mock trial and burned a copy of the Quran, the holy book of Islam. This act of extreme intolerance and bigotry sparked violent protests in Afghanistan, a Muslim country. 20 people were killed during the demonstrations against the West and dozens injured. Is this making responsible use of our freedom of speech?