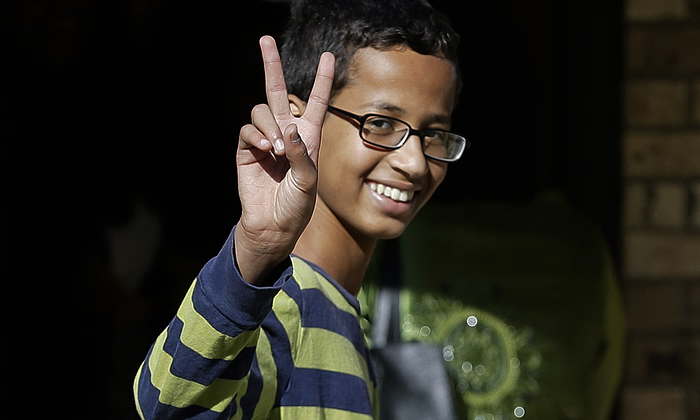 Ahmed Mohamed is a 14-year old Muslim boy who goes to MacArthur High School in Irving, Texas. In September, 2015 he brought a clock that he made to school to show his teachers. He commented that he “built the clock to impress my teacher, but when I showed it to her, she thought it was a threat.” The police said it looked suspicious but there was no evidence that Ahmed meant to disrupt the school or any person.

Ahmed was pulled from class and questioned by the police. He was handcuffed, searched and fingerprinted. Later, the police chief announced that the case was closed and no charges would be filed against Ahmed. He was suspended for a few days and plans to transfer to another school.

The Twittersphere lit up with #IStandWithAhmed tweeted over 900,000 times. Even President Obama posted that his clock was “cool” and invited him to the White House in October to participate in an astronomy night with other young achievers. He was also invited to visit Facebook in California and meet founder Mark Zuckerberg.

Some question the basis of the school’s reaction to Ahmed’s clock. Was it based on a strict interpretation of the school’s zero tolerance policy for weapons and firearms? Was it because Ahmed is Muslim and subject to greater suspicion? Was Ahmed profiled based on his name and religion? These are issues that will be discussed more thoroughly if a lawsuit against the school or police is filed for discrimination.

Photo of Ahmed Mohamed by AP