In October, 2007, a security camera caught two Blythewood High School students kissing on the school bus in South Carolina. Junior Dominique Goyner and his girlfriend were expelled for the remainder of the school year.

Reportedly the buss on the bus lasted for about two minutes. The discipline was based on violating the school’s rule prohibiting sexual behavior.  The school district stands by its decision stating that “a simple kiss does not constitute sexual misconduct. . . . he knows he was doing more than kissing.” 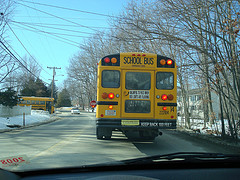 Dominique had no history of infractions at school and several awards for his performance in ROTC. He hopes to have the expulsion set aside and is concerned about it stopping him from attending a military academy when he graduates. He is now being home-schooled and is challenging the expulsion. There is no information available about his girlfriend except that she also has a lawyer representing her. Dominique’s lawyer was quoted saying that “What we have here, in my opinion, is an overzealous enforcement of a rule.”

How do you feel about displays of affection on campus or at school events? Where do you draw the line to decide what’s appropriate and what’s acceptable? Should schools be concerned about this displays of intimacy on campus?

For a similar incident take a look at: http://askthejudge.info/detention-for-hugging/161/