It started out as flirting, but quickly turned into a nightmare. In June, 2009, Florida’s middle school student Hope Witsell sent a topless photo of herself by text (sexting) to a boy she liked. However, it was intercepted by a girl who had borrowed the boy’s cell phone. She forwarded the photo to friends and it spread to several schools.

Hope, age 13, was grounded by her parents over the summer and had her computer privileges restricted. She was suspended  for the first week of school. When she returned, the taunting and name-calling continued. She put up with vulgar names and comments including “Ok, here comes the slut”. Her friends rallied around her and literally surrounded her while walking the hallways at school.

Hope wrote about her life in her journal. “Tons of people talk about me behind my back and I hate it because they call me a whore! I can’t be a whore. I’m too inexperienced. So secretly, TONS of people hate me.”

In a final entry to her journal, Hope wrote “I’m done for sure now. I can feel it in my stomach. I’m going to try and strangle myself. I hope it works.”

On September 12, 2009, it worked. Hope hung herself from the canopy of her bed with a pink scarf. 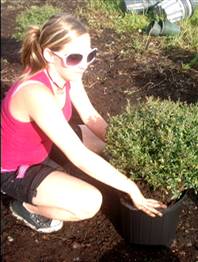 Hope was an A and B student with plans to study agriculture and start her own landscaping and nursery business. She often went fishing with her Dad. In April, 2011, Hope’s parents filed a federal lawsuit against the school district alleging a failure to protect her from “extraordinary ridicule and harassment.”

Below is a Today Show interview with Hope’s mother Donna Witsell.

An AP-MTV poll taken in September 2009 showed that 25% of young people have been involved with sexting. What is there to learn from Hope’s passing? Do you think she expected the attention she got from sending one picture of herself to a boy? Once you send a racy photo, is there any way to take it back or stop it from going viral? Remember, the Internet is the WORLD WIDE Web. There is little, if anything, that is truly private once you hit “send”.