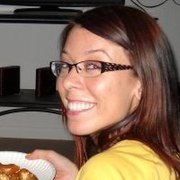 Tarah Ausburn has been a teacher in Arizona for many years. Recently she’s been at Imagine Prep High School.  In early 2011, she commented that “I just like the ability to take a controversial topic and sum it up in one clever line. I’m an English teacher; that’s what I do.” This statement was about her eco-friendly car, a Toyota Prius.

Ausburn’s car is covered with bumper stickers expressing her views on a variety of subjects. One in particular upset some parents who called the school and complained. It reads “Have you drugged your kid today?” an obvious take off on hugging your children.

The car has over five dozen bumper stickers on it proclaiming religious, political, LGBT, feminist and environmental messages. 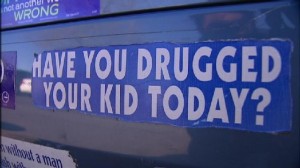 The principal told Ausburn to remove the “drug” sticker or park off-campus. She refused to do either and was fired in February, 2011. The bumper sticker, as Ausburn explained, was “a criticism of us tending to over-medicate hyperactive kids who might not need those medications.”

Her competence in the classroom and quality of instruction was not an issue. What concerned the school was the interpretation of some of the messages. She was told that “They did not fit in with the culture of the community.” 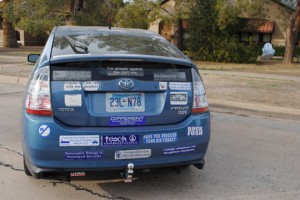 Are you surprised at this teacher’s firing over a bumper-sticker? Are teachers not allowed to express their views on social, religious or political issues? Do you interpret this particular bumper sticker as promoting the use of drugs?

For a similar case that made it’s way to the U.S. Supreme Court in 2007, see Morse v. Frederick. The court ruled that schools may take action when a message, no matter how it’s presented, promotes an activity contrary to the educational mission of the school. So, you have to ask yourself, does “Have you drugged your kid today?” promote drugs?

The Latest: In July, 2011, the fine for displaying an obscene or offensive bumper sticker or other sign from a vehicle in the state of Tennessee was raised to a flat $50.00. Previously, the fine was between $2.00 and $50.00. What is determined to be obscene or patently offensive is left to the ticketing police officer. (Tennessee Code Section 55-8-187). See here for more about the law: