Texting while driving on the rise 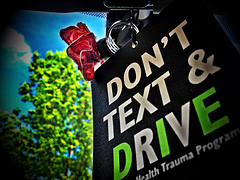 In June, 2012, the Centers for Disease Control and Prevention released the results of a study of high school students about their driving habits. Surprisingly, 58% of seniors report having texted or emailed while driving during the previous month. About 43% of juniors admitted doing the same thing.

These findings come from the first federal study of the subject. Distracted-driving deaths account for approximately 16% of teen motor-vehicle deaths. As of this writing, 39 states ban texting while driving, and 10 ban both texting and hand-held cell phone use. States are cracking down on offenders including jail/prison time when injuries are sustained. See here for a recent case of a teenager sentenced in June, 2012 to 2 1/2 years in prison.

AsktheJudge.info has written several times on this subject and will continue to keep you posted on efforts to stem the tide of drivers who text. A few seconds of distracted driving can seriously change your life – it’s not worth that one message or text. Some of our posts are listed here – we can’t say enough about this problem that continues to damage many lives across the nation.

In September, 2012, AT&T awarded a $20,000 prize to 11-year-old Victoria Walker for her idea for an app addressed to those who text while driving.  Named “Rode Dog,” the app emits annoying barking dog sounds to the driver who’s texting until they hang up. This was part of AT&T’s “It Can Wait”campaign. The sixth-grader commented that “This app allows me to protect my parents if they are driving and texting.” The prize money will be put toward further development of the app. Congratulations, Victoria, on a great, life-saving idea.

As of May, 2014, 43 states have banned texting while driving. Violations result in fines and other penalties depending on the state. The states without such a law include Arizona, Mississippi, Missouri, Montana, Oklahoma, South Carolina and Texas.

Notice: In July, 2017 it was reported that an Israeli-based tech company has developed a device referred to as a “textalyzer.” It would allow the police to plug the device into a driver’s cell phone which would indicate whether the driver was texting, emailing, or surfing the web just before an accident. It’s designed to exclude actual information on the phone, such as pictures or personal emails. The state of New York is looking into the device which is scheduled to be available soon.

A study completed by the Journal of Adolescent Health in 2018 reported that four in ten teens text while driving. 64% of teens in South Dakota texted in the past thirty days, the highest figure in the U.S. North Dakota, Montana, Wyoming and Nebraska rounded out the top five states with 58%, 55%, 52% and 50% respectively.

Texting while driving research and statistics