The President writes to Parkland students 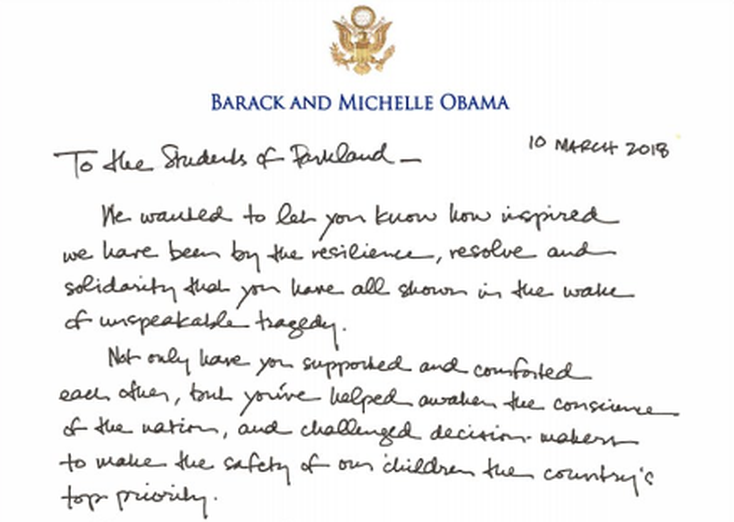 Ahead of the national march in  Washington, D.C. on Saturday, March 24, 2018, former President Barack Obama and First Lady, Michelle, wrote a letter to the students of the Parkland, Florida high school where 17 people were killed on February 14, 2018. Their letter follows.

We wanted to let you know how inspired we have been by the resilience, resolve and solidarity that you have all shown in the wake of unspeakable tragedy.
Not only have you supported and comforted each other, but you’ve helped awaken the conscience of the nation, and challenged decision-makers to make the safety of our children the country’s top priority.
Throughout our history, young people like you have led the way in making America better. There may be setbacks; you may sometimes feel like progress is too slow in coming. But we have no doubt you are going to make an enormous difference in the days and years to come, and we will be there for you.” (signed Barack Obama and Michelle Obama)

We hope America stands up this Saturday to show Congress and the NRA that common sense gun measures are not an erosion of the second amendment. Neither is the March for Our Lives just a high school field trip. Americans of all ages, including Judge Tom & Natalie will be marching to demonstrate the seriousness of this issue and that the majority of the people demand action by Congress in place of twenty years of inaction. #NeverAgain