The second grade class at Tiogue School in Rhode Island was going to meet with their pen pals from another school.  Their teacher told the kids to create a hat to wear for the occasion.

Eight-year-old David Morales decorated a camouflage hat with an American flag and small plastic Army figures.  He wanted to honor members of the military.  In June, 2010, he was told he couldn’t wear the hat because the plastic soldiers were carrying weapons.  The miniature guns violated the school’s zero-tolerance weapons policy.  David was told to replace them with ones that didn’t carry any weapons.  He only had one figure without a gun, so instead he wore a plain baseball cap. 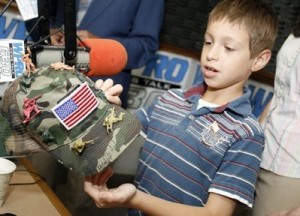 David and his banned hat

Once word got out about this incident, David became a household name in his town.  An official with the Rhode Island National Guard honored David with a medal for his patriotic efforts and gave him a certificate declaring him an honorary brigadier general.

Due to the prevalence of drugs, alcohol and weapons in the public school system, strict policies were passed many years ago.  They have resulted in a decrease in the number of incidents on campus.  Do you think what David did is an example of a zero-tolerance policy taken too far?  Do you think plastic figures was the intent of zero-tolerance policies when first instituted at public schools?  Could the school have handled this case differently without rendering the policy ineffective?  How?

Later:  The school superintendent said he would work on changing the rule because the no-weapons policy shouldn’t limit student expression.

In November, 2009, 7-year-old Samuel Burgos learned about zero-tolerance at his school in Florida. He forgot to remove a plastic toy gun from his backpack. While rummaging through the pack for a pencil, a classmate saw the gun and reported it. The gun discharges small plastic beads at a low velocity. Nevertheless, Samuel was expelled for one year.  In late October, 2010, he was allowed to return to school.